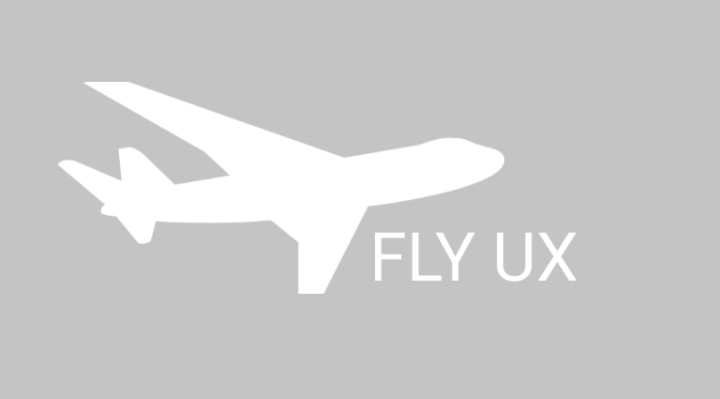 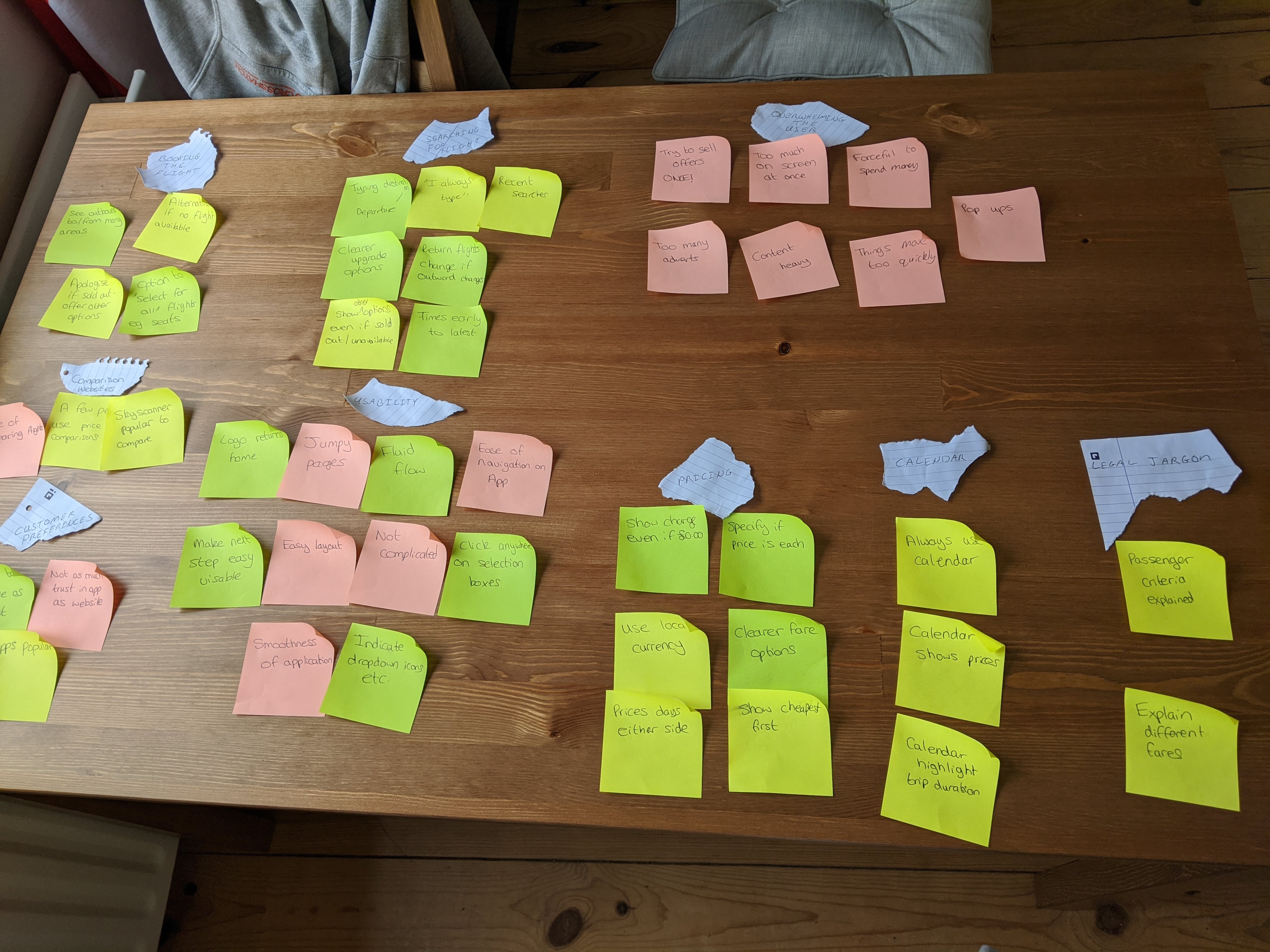 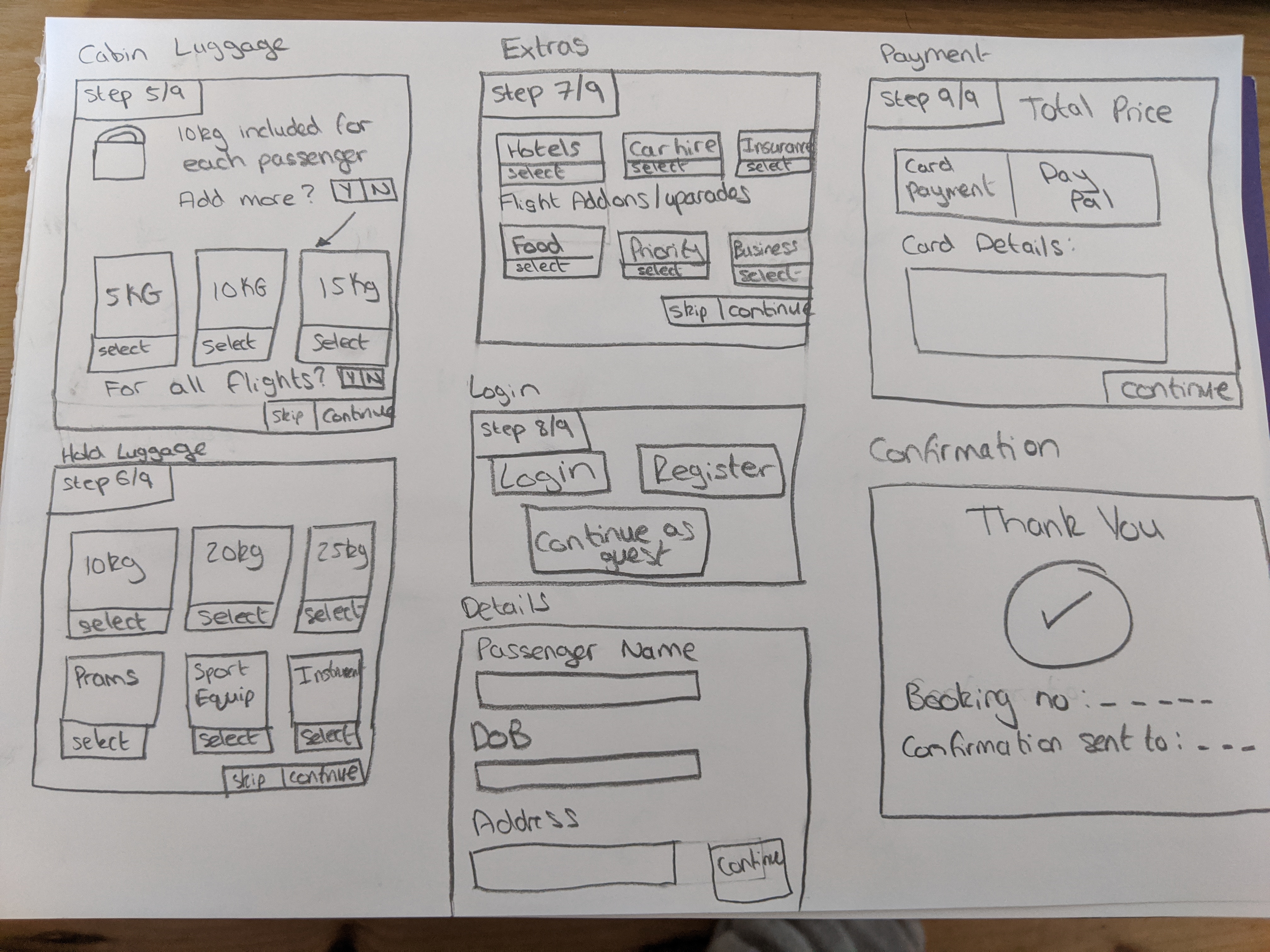 The aim of this project was to design a fictitious airline start-up app that focused on the usability of how the users search, find and choose flights. Through this project I ran through the complete project life cycle and finished with a detailed wireframe to handover to the developers.

The project was completed as part of the UX Design Institute Professional Diploma.

The first stage in the design process was to do adequate research in order to learn more about the user goals when it comes to booking a flight through a mobile app. It was also to find and identify issues that users regularly come across in mobile flight apps and solve those problems with Fly UX. These issues would be highlighted using research methods such as competitive benchmarking, online surveys and usability testing.

The competitive benchmarking document can be seen here.

To gain further knowledge into the user experience of airline apps, I conducted an online survey to gather some quantitive and qualitive data to determine:

The results highlighted that the majority of users preferred using native apps as they found them more reliable and trustworthy than using aggregators. Aggregators like Skyscanner and Kayak were mainly used to compare prices.

The full results can be viewed here.

As the app was for a fictitious new startup company, there was no design to be tested so I conducted usability tests on competitors apps, Aer Lingus and KLM.

The usability test allowed me to observe the user interacting with the app and note their mental models, behaviour and their pain points with the booking process. For the purposes of the project only one user was tested.

The usability test involved an in-depth interview prior to the test to help gain insight to the users goals, their previous booking experiences and their usual pain points if any.

The recruitment screener can be seen here.

The usability test script can be seen here.

From these usability tests I learned that:

The in-depth interview script can be seen here.

The next step in the process was to collect all the data from the competitive benchmarking, online surveys and usability tests and write out notes of importance on a post it notes and organise the data into an affinity diagram.

The notes were then organised into groups that had similar findings. These groups were:

The outcome was that patterns from the data started emerging and started highlighting the direction for the Fly UX app.

After gathering all the data, I went through each step of the user's journey to determine how Fly UX could make the journey through the app flow better. Each stage focused on the users goals, behaviours and pain point in each process. This highlighted two main areas that Fly UX could improve upon, Flight Choice and Choosing Seats.

I then began to map out the users flow through the app from the homepage to booking confirmation. I tried to make the flow as simple as possible while addressing the pain points that were highlighted

After determining the flow of the app, it was time to put everything together in the form of an interaction design document that would roughly outline the look and feel of interaction with the Fly UX app.

I sketched a few different iterations of the app before settling on the one design.

Once I was happy with the interaction design it was time to prototype. I decided to go with a high fidelity prototype to have the ability to convey richer interactions from the user and gain greater data and insights.

The design then went through more user testing to validate or find flaws in the overall design.

N.B. As this is a prototype not all of it is intractable however hints are given if needed.

The high fidelity prototype can be viewed here.

After prototyping the app I felt it necessary to test and validate my design. This test highlighted a few things to change in my design.

One thing that was pointed out was that what was offered for the flight fares wasn't highlighted enough for the user to clearly notice. Overall the user was happy with the design and stated it was very "clean".

After going over the prototype and fixing the issues that arose from the usability test, it was time to get the wireframe ready for handover to the developers.This would be sent with the working prototype and mobile interaction flow so that the developers can get started.

The wireframe can be seen here.

From completing this project I have learned so much about the product lifecycle and the design process that goes into creating a project.

I've learned the importance of usability testing all through the project lifecycle as it really helps validate your designs and helps you to find any flaws or room for improvement.

It's been the biggest UX project that I've gotten to work on and it was a great learning opportunity to greatly increase my knowledge in the field of UX.